The Seth Quote pages are under Construction. “You were born into a state of grace, therefore. It is impossible for you to leave it. You will die in a state of grace whether or not special words are spoken for you, or water or oil is poured upon your head. You share this blessing with the animals and all other living things. You cannot “fall out of” grace, nor can it be taken from you.”
— The Nature of Personal Reality Chapter 9: Session 636, January 29, 1973 “People die when they are ready to die, for reasons that are their own. No person dies without a reason. You are not taught that, however, so people do not recognize their own reasons for dying, and they are not taught to recognize their own reasons for living, because you are told that life itself is an accident in a cosmic game of chance.”
— The Individual and the Nature of Mass Events, Chapter 6: Session 835, February 7, 1979

You Create Your Own Reality “You are given the gift of the gods; you create your reality according to your beliefs; yours is the creative energy that makes your world; there are no limitations to the self except those you believe in.”
— The Nature of Personal Reality Chapter 22: Session 677, July 11, 1973 “There is nothing stopping you but your own imagination. Change the nature of your imagination. The power is within your own hands, and I tell you to use it. For I know that you can use it!”
— TECS2 ESP Class Session, February 3, 1970 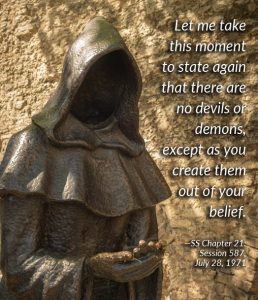 Changing This Collective Reality for the Better “You Are Yourselves The Ancient Dreamers Who Dreamed Your World Into Being”
–Dreams, “Evolution,” and Value Fulfillment, Session 898: Jan 30, 1980 “There are far more wonders to perceive through this inward exploration than you can possibly believe until you begin such a journey for yourself.”
—Seth Speaks, Chapter 6: Session 528, May 13, 1970

The Reality of our Thoughts “It is important that you realize that spiritual ignorance is at the basis of so many of your problems, and that indeed your only limitations are spiritual ones.”
— Seth Speaks, Chapter 21: Session 586, July 24, 1971

“Infinite intelligence guides and protects me in my activities.”
—The Early Sessions, Book 9, Session 493, July 14, 1969

“When you affirm your own rightness in the universe, then you cooperate with others easily and automatically as a part of your own nature. You, being yourself, help others be themselves. You are not jealous of talents you do not possess, and so you can openheartedly encourage them in others. Because you recognize your own uniqueness you will not need to dominate others, nor cringe before them.”

“You must begin to trust yourself sometime. I suggest you do it now. If you do not then you will forever be looking to others to prove your own merit to you, and you will never be satisfied. You will always be asking others what to do, and at the same time resenting those from whom you seek such aid. It will seem to you that their experience is legitimate and yours counterfeit. You will feel shortchanged.”

“You will find yourself exaggerating the negative aspects of your life, and the positive sides of other people’s experiences. You are a multidimensional personality. Trust the miracle of your own being. Make no divisions between the physical and the spiritual in your lifetimes, for the spiritual speaks with a physical voice and the corporeal body is the creation of the spirit.”

“Do not place the words of gurus, ministers, priests, scientists, psychologists, friends — or my words — higher than the feelings of your own being. You can learn much from others, but the deepest knowledge must come from within yourself. Your own consciousness is embarked upon a reality that basically can be experienced by no other, that is unique and untranslatable, with its own meaning, following its own paths of becoming.”

“You share an existence with others who are experiencing their own journeys in their own ways, and you have journeying in common, then. Be kind to yourself and to your companions.”

“Affirmation then means the loving acceptance of your own unique individuality. It may involve denial, where you refuse to accept the visions or dogmas of others in order to more clearly perceive and form your own.

Such affirmation will lead you to your own inner discoveries, and attract from the deepest portions of your being the particular kind of information, experience, or perception that you need. The loving acceptance of yourself will allow you to ride through beliefs as you would through the changing characteristics of a countryside. The more a belief encourages you to use your abilities and vitality, then the more affirmative it is.

Ruburt’s perception is highly altered this evening, and this is an example of certain kinds of both affirmation and denial. He has always emphasized his own unique creative and intuitive processes. In so doing, he denied many of the concepts believed in by others. He accepted the belief that any consciousness could be in some kind of direct intimate contact with experiences and realities usually not perceived, but ignored.”
— Nature of Personal Reality, Chapter 21: Session 675, July 4, 1973

The Energy That You Are

You are here to learn to control the energy that you are, of your being.

“You need to learn the power of thought and emotion, but this should fill you with the joy of creativity.”
—Seth Speaks, Appendix: ESP Class Session: Tuesday, January 5, 1971

NPR – Chapter, Session, page
Seth asked for these words to be separated out differently on the page: “If you would identify yourself with your entity instead of with your present personality, you’d be a lot better off.” — The Early Sessions, volume 1, Session 21 February 3, 1964 ** When you are aware of the existence of the entity or of the soul, you can consciously draw upon that greater energy, understanding and strength.

** There are far more wonders to perceive through this inward exploration than you can possibly believe until you begin such a journey for yourself.

** The intellect can take it for granted that its own information is not all the information you possess.

Other Dimensions of Reality 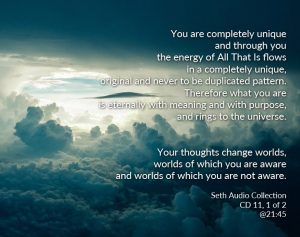 We change all the time; so the past that we’re so obsessed with is not really our past any more. ~Seth ~

You can be anywhere by imagining yourself being there.

The Intense Nature of this Reality

“IN NO OTHER FIELD OF REALITY ARE THE TERMS SO DRASTIC”

“The race also realizes well the advantages and disadvantages of the physical reality it has adopted. It knows for example that there is a tendency to go to extremes. I mentioned earlier that the rewards, the challenges and the dangers exist precisely because so much freedom is allowed.”

“Now. Those within the system know this. Regardless of what you may think of their present performance at any given “time” in quotes, it is from this system that the greatest potentials emerge; for having dealt with it, consciousness undergoes one of the severest tests in learning to handle its own energy.

“The horror and the results of mismanagement, and the vulnerability, are the teaching methods that each consciousness has accepted before entering your system. There is no way out but to learn or to ruin the entire system. In no other field of reality are the terms so drastic. For this reason the inner self withholds much of its knowledge. There must be no leaning upon the very basic fact that behind and within the system there is relief. You must believe in the physical reality and accept the vulnerability.

“Now, from your system spring some of the most advanced of all identities. They go on and learn from other realities, granted, but yours is the hardest to manage, and those who accept it go off into a certain line of development where the potentials are beyond anything of which you can presently conceive.

“Now I am telling you this evening not only because of your own earlier discussion, but also because this material will fit in with other sessions that I have in mind. You are not only ready for them but you are demanding them, and until you are ready you would not understand them.

“First, quite simply, there are many who do not see those failings and shortcomings and trends of which you spoke earlier. They cannot be told; they learn. Now alone they would not be permitted to destroy an entire reality. The mixture of consciousness within your system gives some control. The child must mature, and your system is a maturing ground, a very primary one. A beginning school for those who are trying out for particular kinds of experience. Some simply will not succeed. They will continue instead along other lines of development.

“Now, you have quite literally put in your time, for centuries. (Humorously.) This is one of the reasons that you find yourself very impatient with the development of your fellows, who have not had that advantage as yet. You have learned. You cannot understand why they have not.”